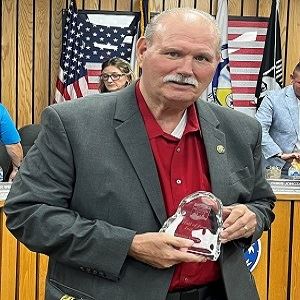 Every year the West Virginia Municipal League (WVML) inducts municipal officials who have served 20 or more years as a municipal elected official into the WVML Municipal Officials Hall of Fame. The WVML membership includes all 230 municipalities in the state of West Virginia.

City of Weirton Ward IV Councilman George E. Ash, Sr. was among the 6 elected officials inducted this year into the WVML Municipal Officials Hall of Fame on Thursday, August 4, at the 2022 WVML Annual Conference. Councilman Ash with 28 years and Mayor Patricia Lewis of Granville, WV with 35 years held the longest tenures out of 2022 inductees.

Councilman Ash has dedicated a large portion of his life to being a public servant. He has proudly served as Weirton’s Ward IV Representative from July 1991 to June 2003 and from July 2007 to present.

When asked about being inducted into the WVML Hall of Fame for serving 28 years as the representative for Ward IV of the City of Weirton, Councilman Ash showed appreciation to his constituents by stating, “I want to thank the residents of Ward IV for trusting me and allowing me to serve. It has been an honor.”

In addition to serving on Weirton City Council, Councilman Ash is very active in the Weirton community, and is currently a member of the:

On September 12, 2022, WVML representatives will be traveling to Weirton to officially present Councilman Ash with an award at the September Weirton Council Meeting recognizing his induction into the Hall of Fame.

Congratulations Ward IV Councilman George E. Ash, Sr. on the well-deserved recognition of being inducted into the WVML Municipal Officials Hall of Fame for your 28 years of service to the City!